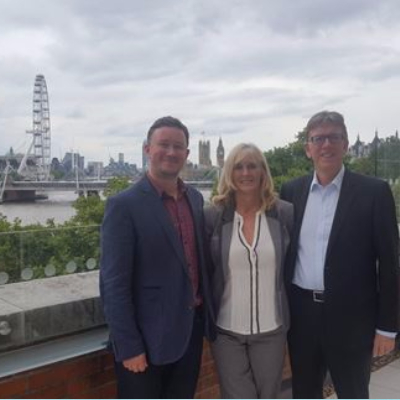 This month our MD Penny is celebrating a special silver anniversary with Nigel Spencer, one of our longest standing clients, for over 25 years. Read more about how they met and what they have worked on together in Penny’s words below!

“It’s unbelievable to think that it was 25 years ago that I first had the pleasure of meeting Nigel Spencer.  Having cold-called his company – The Dairy Federation – the meeting was one of my first sales appointments in my agency career, as an Event Consultant.  Nervously, I visited his office in Regents Park before we taxied to the nearby 5-star Landmark Hotel to view the beautiful Ballroom.  Nigel was easy to talk to and made me feel at ease.  The meeting was a success and Nigel confirmed the venue.

I have organised a variety of events for Nigel over the years, ranging from seminars to Gala Dinners and in 1998, I organised The World Dairy Forum.  This international forum – booked globally every 4 years – involved several venues and an exciting spouse programme including the Ritz, Windsor Castle and a visit to the Cotswolds.  I recall speaking to a butcher in Gloucestershire to organise some Morris dancing on a hotel lawn in Mickleton, which is probably one of the most bizarre things I have ever arranged! It was good fun though!

In 2002, Nigel moved to the Engineering Construction Industry Training Board where he became their Director for Development & Quality.  He was kind enough to introduce me to several contacts, who I worked closely with on many training events. For the last 5 years, we have successfully project managed their Annual Awards Dinner for around 250 guests at various venues in London & Manchester – always with a guest speaker.

It fills me with great pride that Nigel has remained loyal for 25 years to me and my company, First Choice Conference & Events.  I still marvel at those early years when I was so young and still had so much to learn!”

Here’s what Nigel has to say:

“I have worked with Penny & the First Choice Conference & Events team in various capacities over the last 22 years; in fact since Penny set up on her own. However, we go back a bit further than that, as I worked with her in her previous company – so about 25 years in all.  In all that time, I have received a first-rate service & everyone at First Choice Conference & Events has been nothing but highly efficient & extremely professional.”