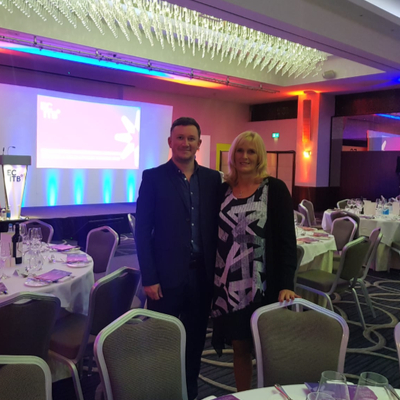 Ross continues to strengthen his relationship with ECITB by working on their annual awards ceremony for engineer apprentices. Aside from one successful year in Manchester, the event always takes place in central London and Ross enjoys the challenge of finding a new and exciting venue each time.

This year, the event was held in a location as central as one could get – The Montcalm Marble Arch, tucked away on a peaceful Regency crescent, just yards from the bustle of Oxford Street. Ross and Polly arrived bright eyes on the morning; with Ross overseeing the build of the bespoke set and stage, and Polly supervising the evolving table plan of guests, attending by invitation only. This year, the event space was located in one dedicated area, which always comes in handy when dashing around throughout the day!

Our A.V team were on site at the crack of dawn, to work their wonders on the new-look set and stage for the evening ceremony, along with a large LED screen to display the nominees and winners (very flash in pinks and purples). The afternoon was spent doing rehearsals and sound checks (Ross always loves this bit as he gets to grab the mic and do a spot of voice projecting!). Before we knew it, we were dressed to the nines and ready to greet all 200 guests at the entrance. Polly was the host with the most as she assisted with the digital guest check-in and even handed out glasses of Prosecco for the later comers, leaving our clients to network and actually enjoy their own event!

This year’s guest speaker was Rob Bell; a TV presenter focused on science and engineering. Rob’s personality was ideal for drawing in the crowd and entertaining them with his warm charm and sparkling personality. Polly and Ross were so impressed with Rob – they definitely plan to book him again soon for other events.

The event manager and ops team were always on hand to ensure the event was running to schedule, proving again that Ross and a walkie talkie is a force to be reckoned with. Meanwhile, Polly supervised the catering team as they presented the 3-course dinner (including a gorgeous pumpkin soup to complete the Halloween date!)

After the awards were announced (set to some upbeat tunes), a cash bar was opened in the foyer to allow guests to continue celebrating and networking – which they certainly did! At the end of the evening, the client expressed delight with the event (management declared it the best ever!) and was highly appreciative of Ross for sourcing the venue and co-managing the project, as well as Polly’s invaluable on-site support.

Next year will be the 10th anniversary of this event, so we are going to have to come up with somewhere very special. Challenge accepted!