Team building with a twist… 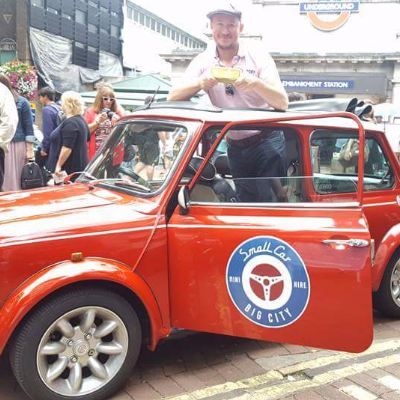 Listed No 1 in Best things to do in London by Time Out magazine, this team building activity on wheels is bound to add an exhilarating touch to your event – we are huge fans of Small Car, Big City! See the city through the eyes of a passionate local guide, whilst being driven around in a fleet of vintage Mini Coopers (each with their own name and distinct personalities). As well as  guided tours and treasure hunts, you could even “blow the bloody doors off” by doing the Italian Job package where participants don bright blue boiler suits and tweed flat caps and given a number of challenges to complete within the allotted time. Without wanting to give too much away, the challenge requires you to thrown caution to the wind when trying to befriend a police officer and attempt to get him to arrest you with a bar of gold in shot! Alternatively, you could have a bespoke tour tailored around Harry Potter movie locations or The Beatles!

Ross was part of the City Explorer experience and picked Poppy as his first ride (a flame red 1998 Rover Mini with an Old English Roof and full-length webasto sunroof!). With a swinging 60’s soundtrack on the stereo, the fleet of cars sped the group over to Regent’s Park, tearing up the traffic and honking the horns. With pedestrians staring, waving and taking photographs, it’s hard not to feel like a celebrity! We were dropped at the Rose Garden (which none of us knew existed) and enjoyed a scented stroll to the lake, before climbing back into a different Mini (Lilly this time, the “pocket rocket”).

Avoiding all main roads and careering up and down the side roads of Marylebone, we ended up at Burlington Arcade in Piccadilly where we were greeted by an official beadle in top hat and frockcoat who reminded us not to run, whistle or ‘behave boisterously’ whilst exploring the upmarket shops within.

After tearing around Trafalgar Square in Betty (a ’99 Paul Smith) and spotting ‘the smallest jail in England – room for 2’, we sped up and down the bumpy cobbles of Covent Garden before being dropped in Neal’s Yard for a snoop around the vintage bars and shops – including one of London’s best cheese emporiums!

After donning smart blue boiler suits, the comical driver of Daphne (a racing green ‘outrageous flirt’) put the pedal to the metal and we hung on for dear life as we tore down to Embankment where the escapade culminated in a fun photo shoot with flat caps and gold bullion bars. Such a simple concept gives a new lease of life to the activity field, proving that nothing is cooler than a vintage Mini and a bit of throttle!

If you think that you can handle the speed, let us know and we would be delighted to whiz you across a proposal for your next team building event!