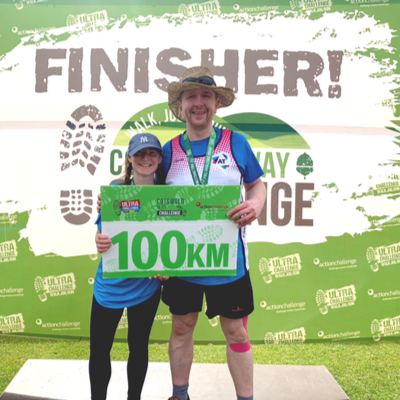 Hear what our amazing Kate has to say about an absolutely unbelievable ultra challenge a couple of the team recently took on:

Whilst the rest of the UK was basking in the hottest day of the year so far, Dan, Jas and I were taking on the toughest physical task we’ve ever attempted; The Cotswold Way Ultra Marathon. 100km (62 miles) non-stop from Bath to Cheltenham along the Cotswold Way with no sleep and as it turned out very little shade! We set off at 8:20 am from Bath Royal Crescent alongside hundreds of other participants, some running, some jogging but most walking like us. Despite a less than brilliant nights’ sleep most likely due to a few nerves and the biggest meal we’d ever consumed the night before sitting in our tummies, we were all feeling fairly ready for the ultra challenge ahead.

We’d only walked about 10K before the heat became an issue, there was very little escape from it as we walked over fields and up hills with little to no shade. We were each carrying 2 litres of water which with all our other supplies made our backpacks pretty heavy, but we’d drink through it between every scheduled stop ready to re-fill. On the first day it was really difficult to focus on much more than putting one foot in front of the other as the heat was torturous, we didn’t chat too much and didn’t really get to appreciate the scenery after the first few hours which was a shame but there was a lot of camaraderie and high spirits amongst the other competitors and somehow this helped to spur us on. We were met by Penny and Ian at the lunch stop who took care of us; filled our water, brought us food and perked us up ready for the next leg. The afternoon was hard with no relief from the sun, so we were very glad when sunset arrived bringing cooler temperatures and dinner was finally on the horizon. The lovely Ross met us at dinner time along with some family including children who were up way past their bedtimes, but they all really lifted our spirits and Ross even offered foot massages and fresh clothes, he made it clear it was a one-time only offer!

Then came the night…

Despite being quite worried about the night section the coolness night had brought with it was gladly received and it felt like no time at all before the sun was peaking over the hills. Dan was at quite a low point during the night and Jas began showing signs of heat stroke so the slog towards Painswick was hard and long, I did my best at motivating them, but I think they both hated me at that point. I too discovered that the combination of sleep deprivation and exercise brings with it the occasional spell of dizziness and nausea which when you’re tackling hills is pretty horrible but somehow we all kept each other going and we got to Painswick where some family members plus Karen, Cheryl and Laura were waiting with hugs, frozen grapefruits (to be used as foot rollers) and motivational pep talks. Unfortunately, and very sadly Jas retired at this point having turned grey and then pure white, as the heat stroke finally took hold but once Dan and I had a bit of breakfast inside us we were ready to get the last quarter done.

Spirits were high and Dan and I chatted our way through the last 21km despite the blisters on our toes really starting to shout. I took my boots off for about 5km to give some relief to my little toes (just changing the pain for a bit was good!), we had some monster hills to conquer but once we had, the views were spectacular and familiar landscape started appearing which really perked us up. Someone switched the summer back on around 11am but the temperature was much more bearable than the previous day and with the end in sight we were quite happy. At long last after just over 33 hours we crossed the finish line in Cheltenham being met by lots of family, friends and most of the First Choice Conference & Events team, the cheering, smiles and hugs were amazing, and the feeling of elation was massive.

Despite it taking us far longer than we ever though it might (although we are totally blaming the heatwave for that), we are so proud of our achievement and couldn’t have done it without our families and the teams’ support. There were plenty of dark moments but luckily the odd giggle too (I giggle when I get tired so you can imagine how irritating that was at about 3am) and to manage such an ultra physical and mental challenge will be something that stays with us for a long time. We are also thrilled that as a team we have collectively raised over £4,000 for our charities and hopefully along our fundraising journey we have raised awareness about what they each do. After a few days rest the team are all fighting fit once more and wondering what will be next, I’m keen to perhaps collect all the medals in the Ultra series; there are 9 in total but I don’t think there will be any takers from the team willing to join me, lets just say I don’t think I’ll be allowed to choose the next team challenge!