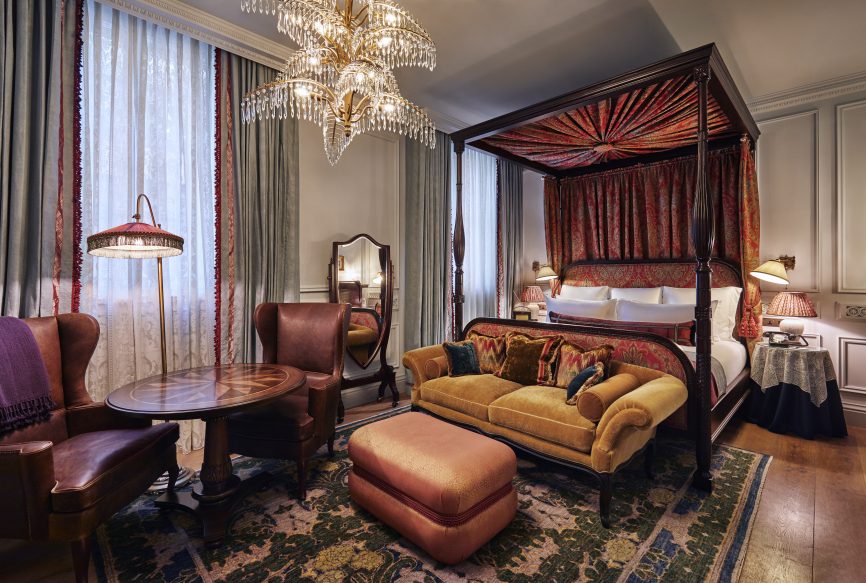 The new venue that everyone is talking about, The Ned is set to open in May 2017. Set in the iconic former Midland Bank building, the heritage venue will host nine restaurants, 252 bedrooms channelling the 1920s and 1930s with designer vintage pieces, hand-knotted rugs, brass and mahogany furniture and rainforest showers in the marble bathrooms. There is also a range of men’s and women’s grooming services (Cowshed, Cheeky and Neville) and ‘Ned’s Club’, where members have access to a rooftop pool with spectacular 360-degree views across London, gym, spa, hamam and late night lounge bar, and Princes Street and Poultry Domes, which will both host intimate bars.

Dominating the belly of the building is the bank’s original vault, with its twenty tonne, two-metre-wide door, which will house Ned’s Club Downstairs and the Vault Room lounge bar. The vault contains over 3,000 stainless steel safety deposit boxes and inspired the design of Fort Knox in the 1964 film Goldfinger.
Ned’s Club Active has cardio, strength and training equipment, a boxing gym, Pilates, yoga studio and House Ride (spinning). At the spa, there is a 20 metre swimming pool, hamam, sauna and steam room. Eight public restaurants in the former Grand Banking Hall serve food that spans the globe, from Britain to Northern Italy, North America to Asia, as well as a further restaurant and two bars in Ned’s Club Upstairs.

The Ned’s six private hire rooms and two terraces are among the building’s most elegant spaces – all benefit from natural light and have a dedicated reception area. Featuring original walnut panelling and crystal chandeliers, The Tapestry Room takes its name from the remarkable pastoral tapestry that wraps around the upper walls – the largest of its kind ever produced in England when it was created in the 1920s.

To coincide with our brand-new website launch, check out our choice prizes page prize to win a night’s stay at The Ned!